With the 2010/11 season coming towards an end in England, attentions turn once again to the Nordics for my regular fix of football.  Denmark still has a few rounds of matches left although in the Superliga there is only pride to play for after FCK wrapped up the league two weeks ago.  That and second spot, which this season sees the Danes steal a Champions League qualifying place from the Scots.  With five games to go three teams were still in with a shout including Brøndby, who if anyone could do with a slice of luck it was them.

And what better way to move a step closer to a place amongst Europe’s elite than a win against bitter rivals and champions FCK in El Vidunderlig  Classico or the New Firm.  After the “fuss” of the last encounter between the two teams where the Brøndby fans had boycotted the match at Parken when they were told they would be fingerprinted to try and avoid causing trouble in the stadium, this game promised a bit of a calmer atmosphere.  Still, it was one not to miss so I headed out to Copenhagen a day earlier than normal to see if it could match the intensity of the Stockholm derby from last month.

But before any main event you need a warm up act.  Whilst Brøndby had arranged for “Outlandish” to play live on the pitch before the game, one look at the dodgy outfits had me reaching for the good old crystal football to see if there were any other options.  And of course once the mist cleared there was the perfect option.  Of course, why didn’t I think of it earlier, BK Avarta v Frederikssund IK from the Danish 2nd Division East, kicking off at 1pm, a 30 minute walk away from the Brøndby stadium.

So what do you want to know about Danish 2nd Division (East) football?  It is comparable to Ryman/Zamaretto/Evostik Premier in terms of attendances with the highest average (belonging to Eastern league leaders Nordvest FC) of 598 this season, and the average across both regional leagues of 270.  BK Avarta were towards the top end of this with 411 at their Espelundens Idrætsanlæg ground in the western outskirts of Copenhagen.  The players are all part time, although they do have a disproportionate number of Morten’s in their squad (15% of them).  Admission was just 60DKR (about £7) to home games, again similar to England and of course this being Denmark, beer and sausages would be on offer to everyone.

I wasn’t alone for this Super Sunday.  Ben would be wandering down the road for the afternoon, making his debut in the press box at Brøndby for GTC Media.  This wasn’t the first time we had taken in the Copenhagen derby.  Nearly four years ago to the day we had been bouncing around on the Faxe Terrace as FCK came, saw and conquered to take the title.  After the game a photographer approached us and asked to take our picture.  Some six months later we appeared in the Daily Express in an article about English football fans who looked abroad for their kicks abroad.  My Mum was so proud.

After negotiating the complexities of the Danish Klippenkart system we were away, heading into the western suburbs of Glostrup for a double dose of delightful Danish.

BK Avarta 3 Frederikssund IK 0 – Espelundens Idrætsanlæg – Sunday 8th May 2011
Going to watch Avarta is like coming home.  If Lewes FC had a Danish cousin then it would be here in Espelundens.  Of course the sunshine made the magic happen, but still for a small club they had got so much right.  On the walk up from Brøndbyosyter station we came upon a huge crowd queuing where the football ground entrance was.  Surely this wasn’t for the football?  After waiting for a few minutes in the crowd we scanned the people around us.  Hmm, no real “football types”.  In fact this wasn’t the football but a queue for Copenhagen’s largest flea market, held every Sunday at 1pm.  Ah, the football was next door, where that sign said “Football”.

The Danish Kroner to the pound has strengthened by around 30% since I have been travelling out this way.  But even so 60DKR for admission was a bargain.  Through the gates and nirvana opened up in front of us.  Espelundens is a simple ground.  One smart newish stand running down one side of the pitch, and a decent size clubhouse behind one goal.  But what set it apart was the huge grass banks that rose up from the pitch on three sides.  You can see now how such a modest club can accommodate 6,000 fans, although I wouldn’t fancy standing on there in the pouring rain.  But on a sunny day everyone was laying back and enjoying the sunshine and the game on offer.  Did I mention beer?  Well what about this – the cheapest beer in Copenhagen.  Carlsberg Pilsner or Dark for just 25DKR – about £3.  You northerners may bang on about this still being “bloody expensive” but bear in mind a normal local bar in Copenhagen will see you pay double that, whilst a tourist trap on Nyhavn will see it top the 80DKR mark.

Now that's what I call a tunnel!

It was good to have Ben’s local knowledge and translation skills on hand.  He may know only a smattering of Danish words but the words “Sausages are ready” was translated at double quick time and we were at the front of the queue.  The players emerged from a tunnel.  Nothing out of the ordinary there you may think.  But this was a proper tunnel.  Huge concrete pipe bored through the hillside.  I have never seen a finer football entrance.

The game started at quite a pace.  Avarta, sporting a Lewes-esque away kit had Luka Modric in midfield.  If the Croatian ever needs a body double to fool the fans in London then the Avarta number 6 is your man.  Same hair, same girly hairband, same boots and the same almost bowlegged passing style.  He pulled the strings in this game, setting up the opening goal in the tenth minute from a corner that was headed in by the big centre back (actually both centre backs were huge so it was the bigger of the two).

There was a fair size crowd for this level of game.  I have been to a few matches at this level and if the attendance breaks three figures it is a good day for all.  However, with the sunshine, the greenery and undoubtably local talent like this, the crowd was nearly 400.

The second half saw Avarta dominate and score two further goals towards the end of the game.  With both teams not going up or down it was a bit of a dead rubber.  But as a great afternoon out then it could not have been any better.

More pictures from a lovely afternoon of football can be found here including one of a bloke with the highest shorts in the world, an Anti-Glazer protest and more pictures of THAT tunnel. But for now it was a thirty minute walk into the sunshine down to Brøndby.  As we arrived at the stadium so too did the police.  “That looks like the bomb squad” said Ben.  And so it was.  A threat had been received and the game would be delayed.  What to do but go to the bar. 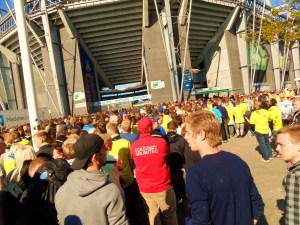 Considering the animosity between the two clubs, you could not have believed the scene we witnessed on the other side of the ground.  It was almost like a village fete, with football related games for the kids, grills, beer and beautiful women galore. The fans started getting restless after an hour or so, wanting to get into the ground and start their show.  Or were they just too excited to see Outlandish?

Six years after they won their last title there are signs that life could be coming back into Brøndby.  Last season they finished in third place, and this season they seem to be making more of a fight of second place with OB.  FCK on the other hand just seem to have cruised to the title.  Despite losing to Chelsea in the Champions League knock out phase in February, they have continued their dominance domestically, coming into this game on the back of five consecutive wins.

Despite the wait we were not disappointed when it came to some fan action.  FCK had filled the top tier of their stand, with most of the fans dressed in all black.  They had been bused direct to the ground to avoid any problems and they started their flag waving early doors.  Not to be outdone the home fans launched into a riot of yellow and blue as Van Halen pumped out of the speakers.

Unlike the regulations in Sweden, the game started with flares and smoke filling the stadium.  Both sets of fans created a huge noise despite the fact less than 20,000 were in the stadium.  Whilst not at the intensity level of the Stockholm derby it certainly put any game in England to shame due to its noise, colour and show. What more could you ask for on a Sunday afternoon?  Well what about some free beer?  And while you are at it some popcorn and a blanket in case we got chilly?   Beer, sausages, popcorn and blankets were all procured during the course of the afternoon to keep our energy levels up and our Twitter audience up to date.

The long hike up to the press box was a step too far in the second half so we used our  passes to sit in the posh seats.  Everyone here got a free beer, with an ingenious little plastic lid containing some peanuts.  Danish design wins the day again.   The game itself was destined to be a draw.  I could go into graphic detail, but you didn’t really want to read that did you?  After all, you can get all the details from Joe Short in his excellent report  here.

So at full time we headed down to the Mixed Zone.  With no English interest on show and our combined Danish stretching to “thank you for food, sausages are ready and where are my trousers” our questioning abilities were severely limited, so we just stood and listened to the others.  The basic gist was that a point was a fair result, Brøndby would have liked all three points in their hunt for a Champions League spot, but they will take one game at a time (Dull football clichés translate into many languages the same). A stonking day out even if I do say so myself.  I urge all football fans to experience a Scandinavian derby game at least once just so you can see what you are missing by watching the sanitised product we have on offer in England.

More photos from the game, and more importantly the fans, can be found here. Including the best looking photographer in Denmark, the bloke who came to the match in his dressing gown and Ben (aka @excession1) hard at work.